Święta Lipka (ger. Heiligelinde) is a village in North-West Poland in Masurian Lake District. The agreement for the first organ for the sanctuary in Święta Lipka was signed in 1719. The construction was commissioned to Johann Josua Mosengel. It had 21 stops spread over 2 manuals with no pedalboard. During the construction work it was decided to extend the organ with an additional positiv division and later a pedal division resulting in 1721 with 3 manuals with pedals accumulating to 40 stops.

In 1905 Bruno Goebel was commissioned to do a general overhaul, but what transpired was a new instrument in the old baroque organ case. Old windchests were removed and new tubular key and stop action was applied. The stoplist was reduced to 2 manuals with pedal and followed the then romantic trend. Only 3 stops from the original organ remained: Principal 16′ and Octave 8′ from the pedal and Grossgedeckt 16′ from the 1st manual. In 1945 all of the metal pipework was destroyed by soldiers of the Soviet Red Army. Most of the missing pipework was replaced in the years 1965-1973. Reed pipes were made by the company of Ernest Pękała in the 1970s. The only original reed stop in the organ is the Fagotto 16′ from the 1st manual division. It is a free reed stop which is quite unusual. It is worth mentioning the religious brother Waldemar Strzyżewski who became an organist in Święta Lipka in 1965 as he was also an organ builder who continuously repaired the organ over many years. In the 70s he installed an electric driving gear for the figures, by which point hadn’t been moving for over 150 years.

Currently the organ from Święta Lipka is used very regularly, especially during the summer season. The sanctuary is a popular pilgrimage destination in the region, and every day during this season there are multiple mini-recitals showing the capabilities of the organ. The organ is very well known for its façade with moving figures. There are figures of Archangel Gabriel and Our Lady. When moving, they show the scene of Annunciation (ger. Verkündigung). The Archangel bows and Our Lady replies with a nod of her head. Slightly below there are rotating stars (activated by Zimbelstern). On the middle tower there is a little angel playing mandolin. Below thereare four little angels playing bells (ger. Glocken). On the case of the positiv, there are two angels playing trumpets (activated by Fanfaren switch). The animations of the figures in the façade may be also found in the sample set, in the last Facade tab.

On the real organ there is a small inconsistency, as the Trompetebass 8′ drawknob for the pedal division enables the stopped flute stop. In the sample set this stopped flute was named as Gedacktbass 8′ and the missing pedal trumpet was made out of the Trompete 16′ from the 1st manual, slightly voiced to fit the organ. A Fagotto 16′ was also added to the pedal division as a directly-borrowed stop to add an interesting colour to the pedal division. The organ originally has one tremulant for the whole instrument. In the sample set 3 separate tremulants were created for each division (only a few stops from the pedal section were sampled with the tremulant). The manuals and pedal keyboard compasses were extended accordingly from f3 to c4 and from d1 to f1, however manuals’ division compasses were extended only to a3 for 1st manual and to a4 for the 2nd manual division as it has a compass one octave higher for the Superoctavcoppel.

Despite the difficult history, the organ now is in a very good shape, well maintained and its sound capabilities and charming moving facade bring a lot of joy for the pilgrims visiting the sanctuary and the organists playing this famous organ. 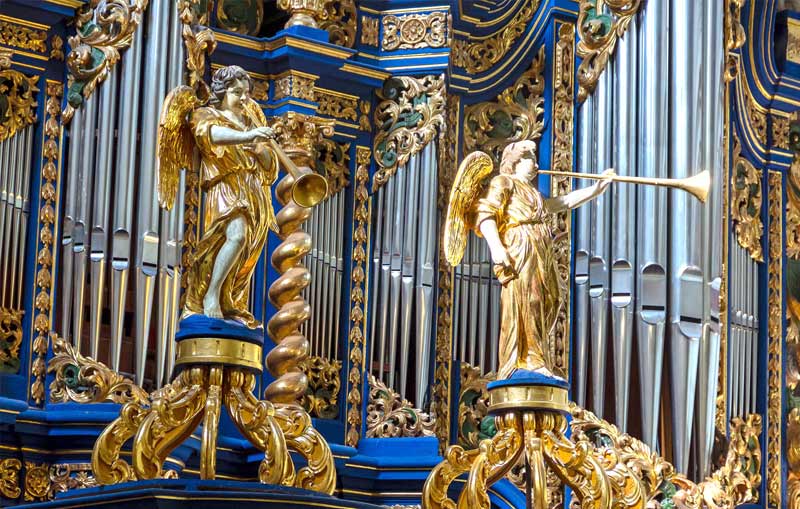 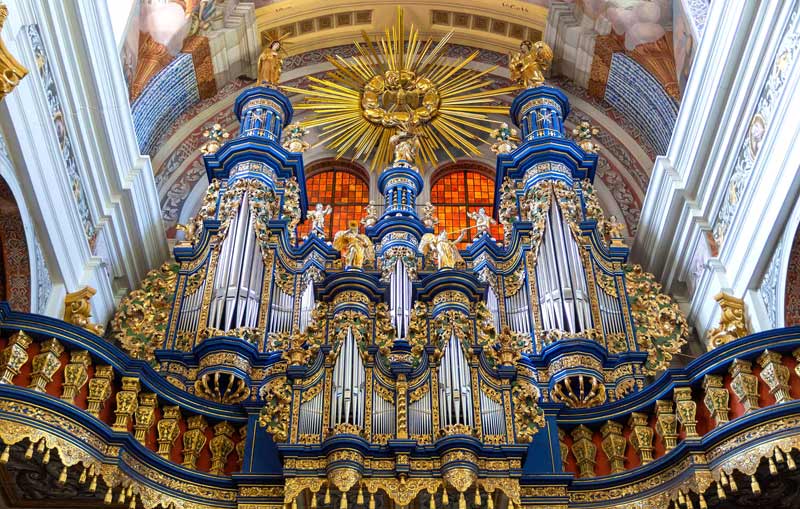 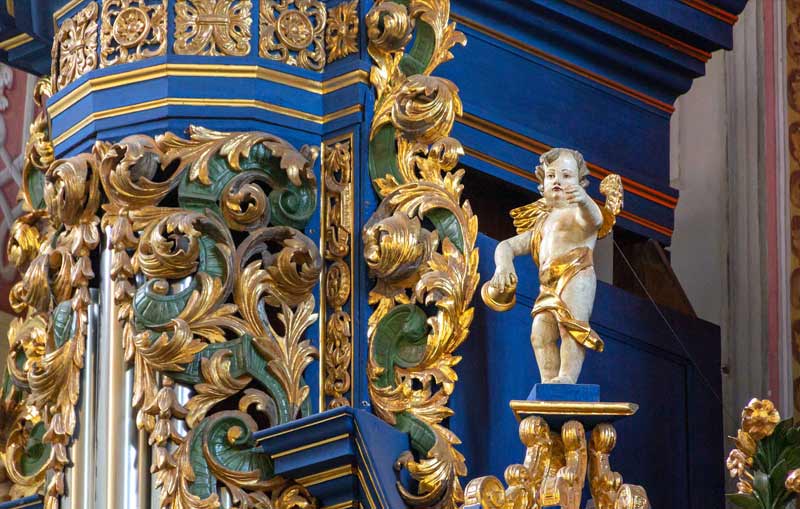 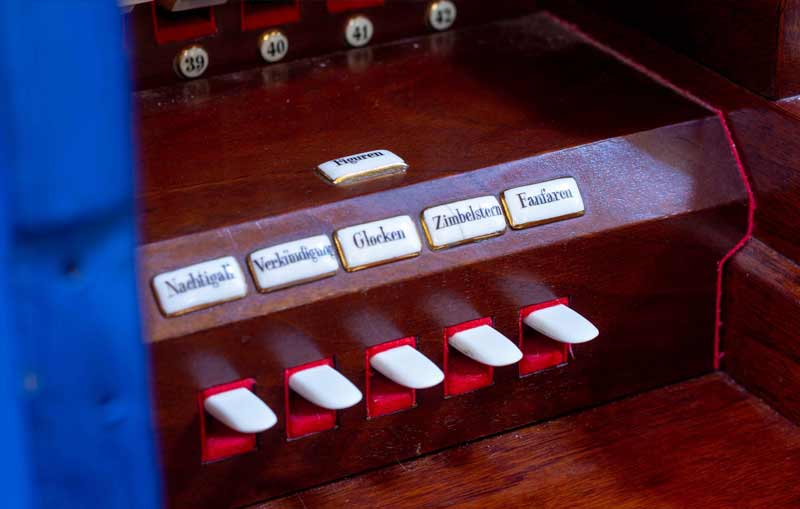 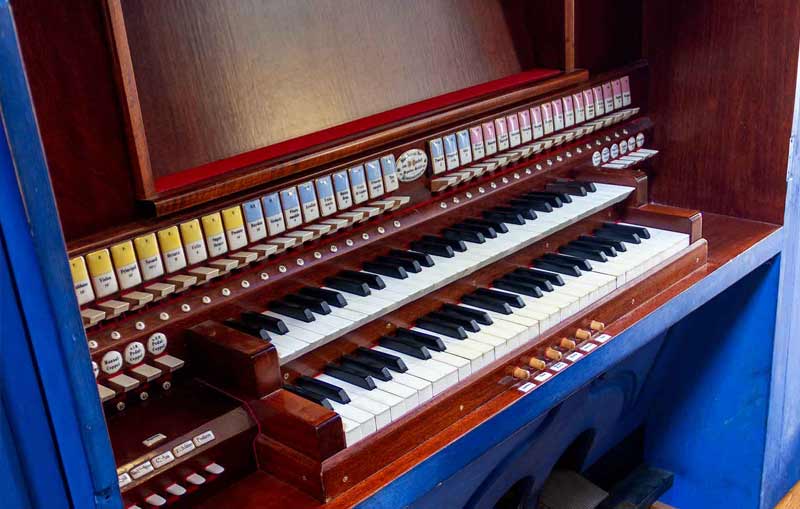 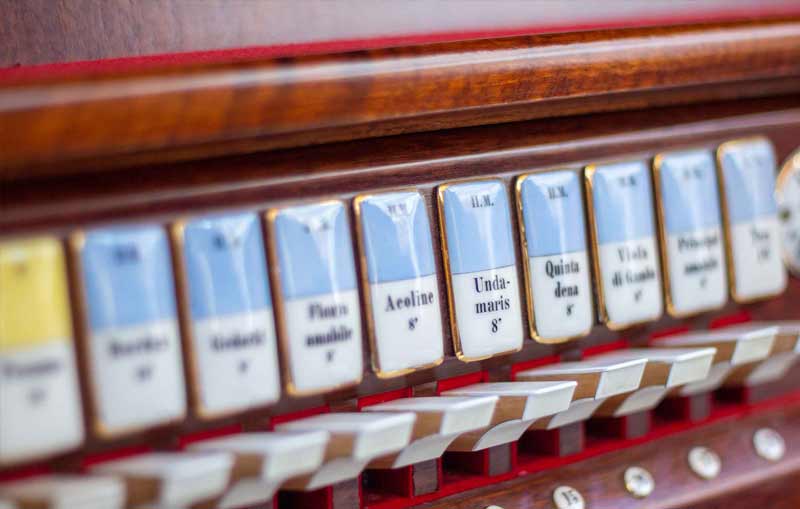 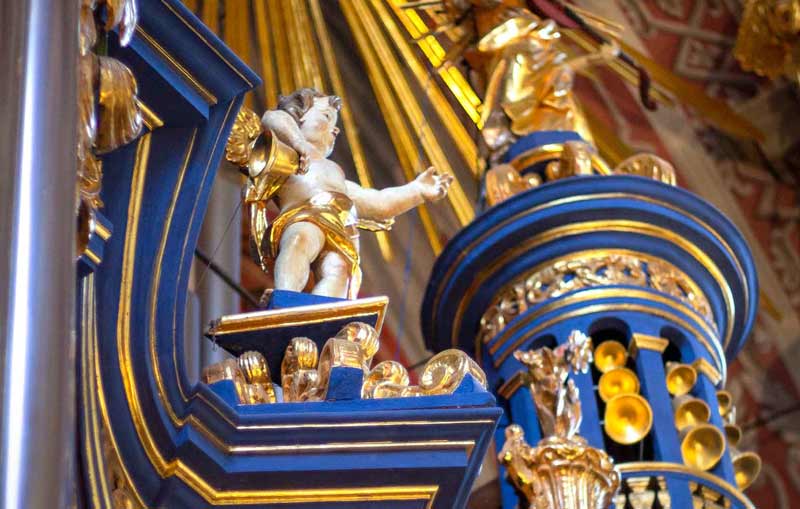 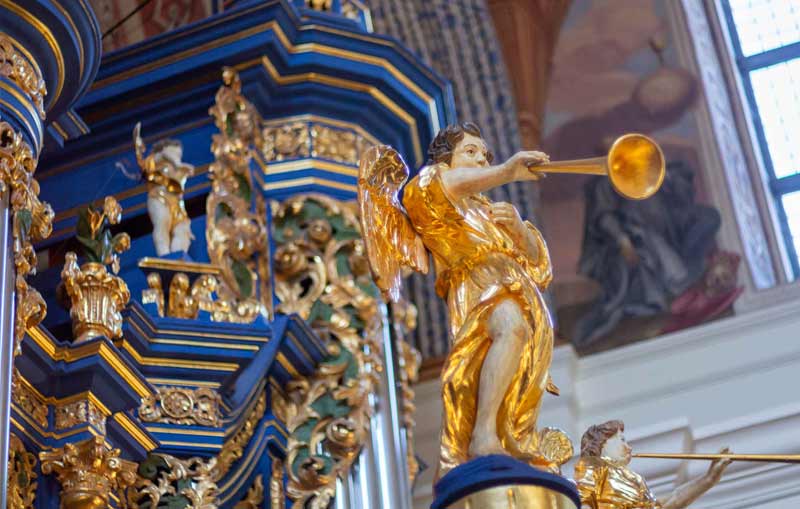 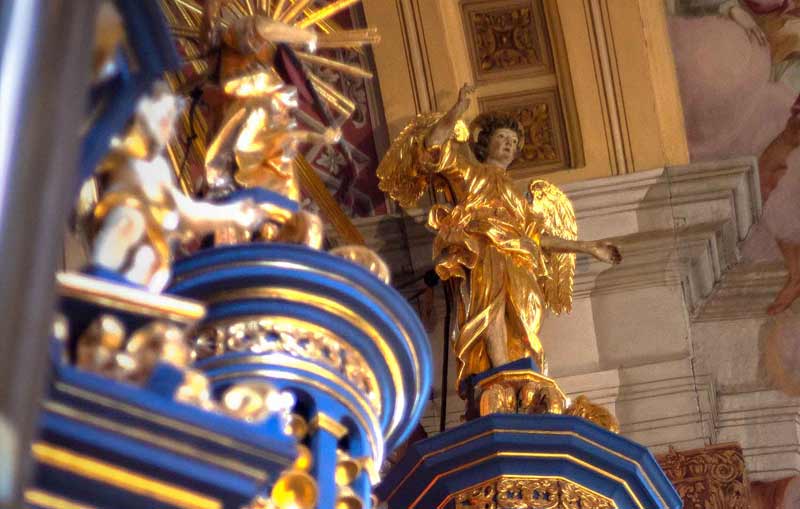 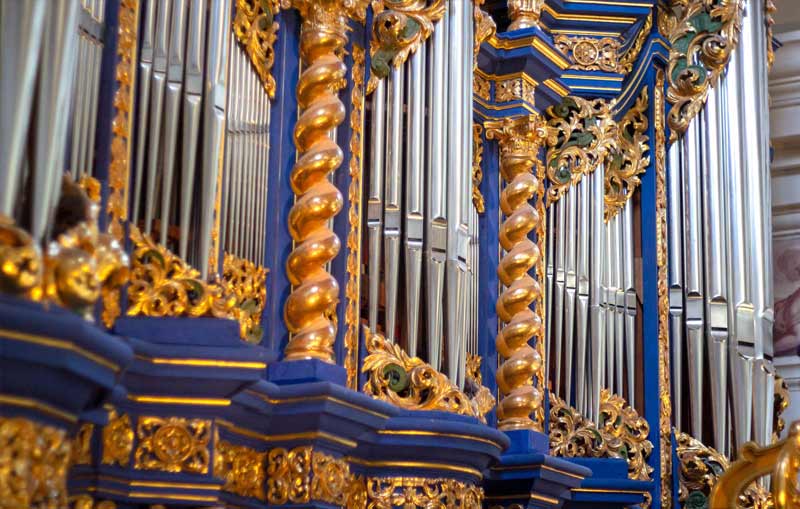 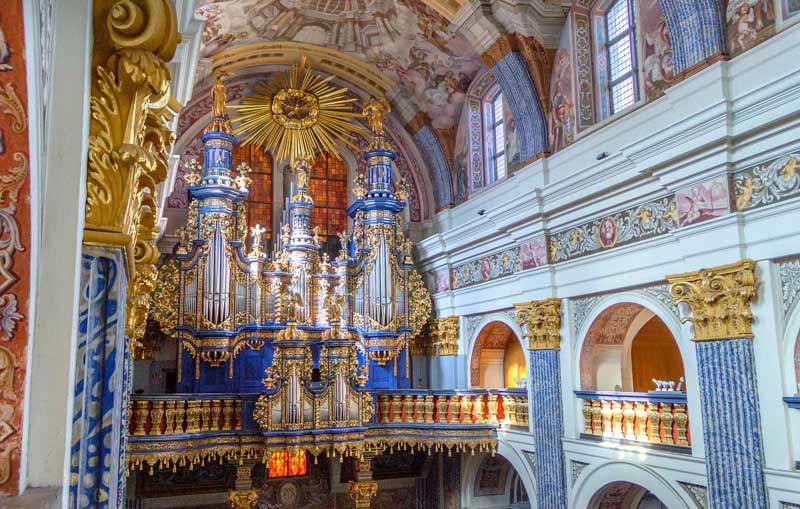 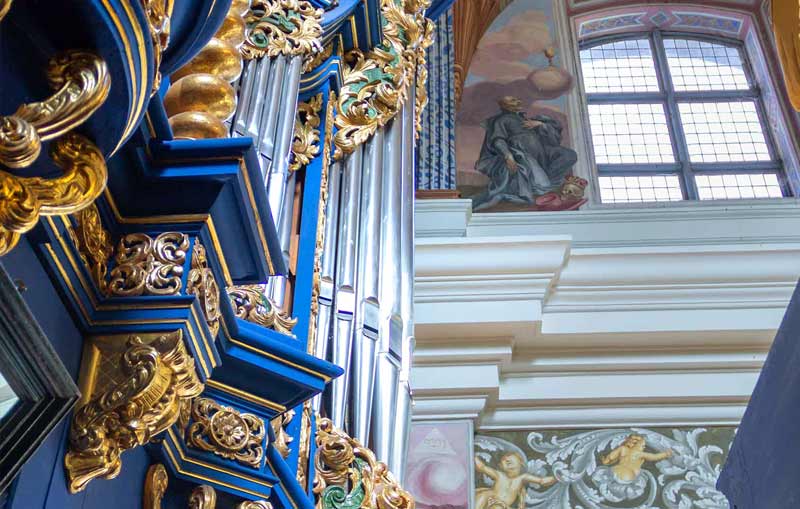 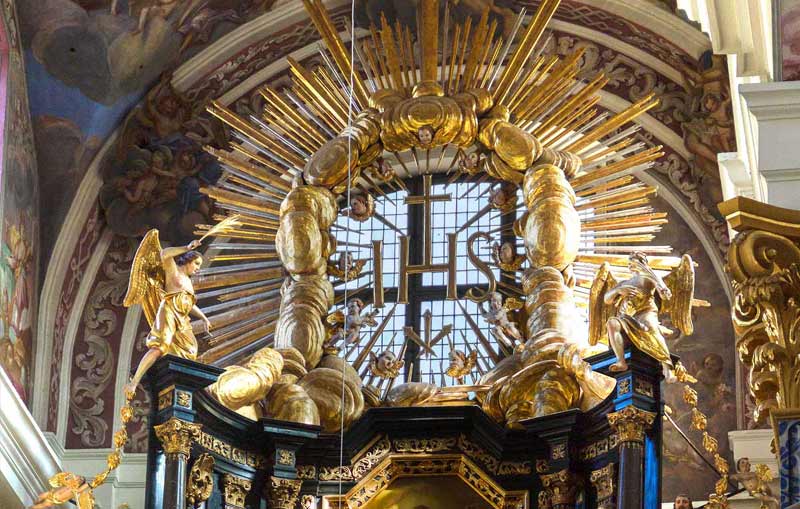 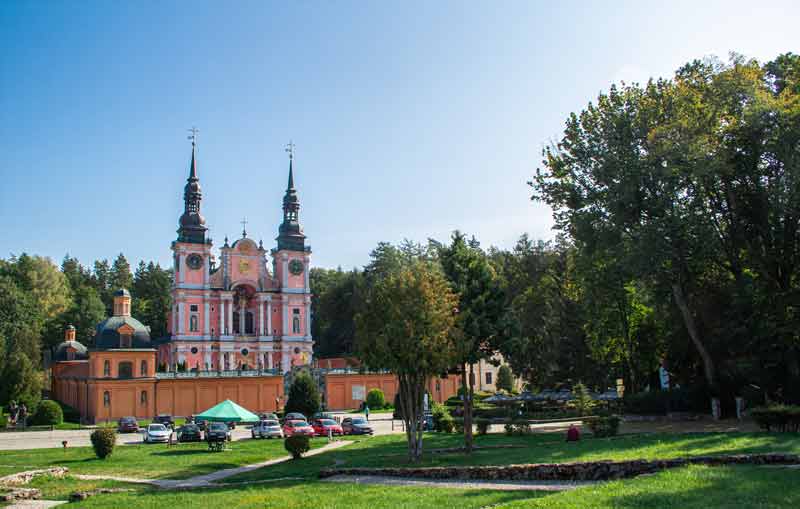 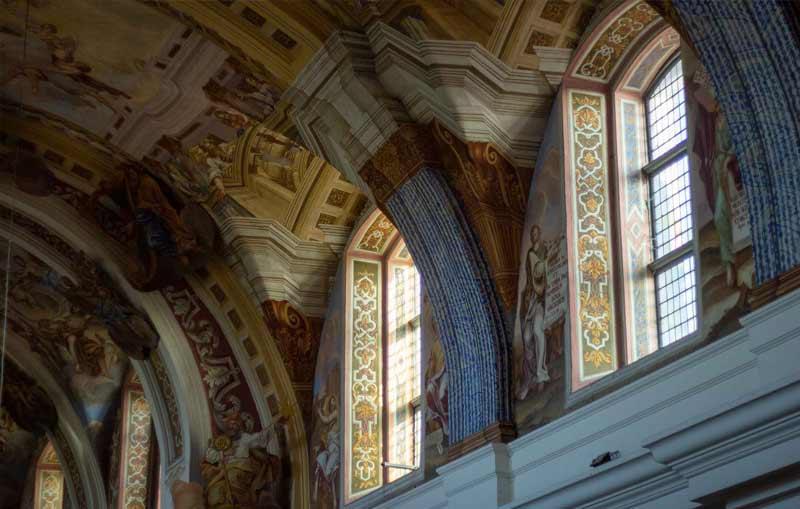