The organ of Obervellach has an interesting and emotional history. Built in 1700 by Franz Köck it is one of the most important historic organs of Carinthia (a region in lower Austria). At the time it was built it was the biggest baroque organ in Carinthia with over 20 stops. Another unique feature for the time was the sun of pipes in the middle of the instrument. Originally these pipes were speaking, possibly forming a special mixture. Holes in the back of the sun verify this presumption. This sun can also be seen as a homage to the organbuilder Eugenio Casparini. Originally the instrument had two manuals and a pedal (both built with a short octave). The original temperament can only be guessed. For the sampleset we have chosen a historic temperament of Barnes, as the instrument nowadays is tuned to equal.

Sadly during the first half of the 19th century different organbuilders carried out “restorations” and modifications on the instrument. As there are sadly no documentations about them, it can only be roughly guessed which works were carried out. A quote from the 1958 restoration paper says:

(The organ at the moment only has one manual with a rather illogical, randomly put together disposition. The status quo is the cause of a rather huge mass of inadequate interventions of inferior organbuilders who didn’t know how to treat such an old and valuable organ correctly.)

Before the restoration in 1958 the organ we found in Obervellach was a one manual instrument with a huge Hauptwerk, basically most likely combining the two divisions (original Hauptwerk and Rückpositiv) into one huge keyboard. But it could be seen immediately that the organbuilders who worked on the instrument didn’t really know what they were doing. The record of the restauration speaks about “grausame Eingriffe von unwissenden Orgelbauern” (cruel interventions by ignorant organ builders). They changed much of the pipework to a terrible extent and even named the stops incorrectly. According to the old documents from the restoration in 1958, the disposition was as follows:
Aeoline 8′, Quinte 2 2/3′, Viola 8′, Principal 8′, Quinte 1 1/3′ Flöte 4′, Gedeckt 8′, Superoctav 2′, Mixtur 3 fach, Gambe 8′, Prästant 4′, Octave 4′, Baßflöte 4′, Tremolo, Fagot 8′, Violon 16′, Subbasß 16′, Octavbaß 8′, Posaune 16′.
Sadly there is no indication on which stops belonged to the pedal, so it is to be guessed how many stops the pedal really included.

During 1958 the organbuilder Pirchner from Steinach am Brenner (Tyrol) was asked to restore the instrument to a rather original state with as many original parts as possible. Rather original state because the organbuilders who worked on the pipework before changed too much of it, therefore it was rendered unusable for the restoration. Although much of it was mistreated, several stops could be saved and implemented in the restoration with hardly any change.

The main organ case, the original windchest of the Hauptwerk, and several of it’s stops were used after a thorough restoration in respect to the materials. The restoration of the casework and carvings were carried out by the renowned restaurateur Adolf Campidell from Feistritz. The original pipework which was maintained unaltered was: from Hauptwerk: Prinzipal 8′, Copel 8′, Schwebeprinzipal 8′, Oktave 4′, Oktave 2′, Quinte 2 2/3′, Quinte 1 1/3′, Mixtur 3 fach, from Pedal: Subbaß 16′ (12 bass pipes), Octavbaß 8′ (12 bass pipes).

The rest of the pipes come from 1958, possibly with some old reused parts. As the organ originally had a short octave compass, it was necessary to rebuild the lowest missing pipes to complete the compass to a chromatic one as we know it today. Sadly the Rückpositiv had to be rebuilt completely. Also the pedal got complimented to d1, so the missing 15 pipes in the treble were also added in that rebuild. As the wind system also was insufficient, a completely new one was installed with a new blower as well. As the supply of electricity wasn’t given back in the time, a Schöpfbalg also was installed during that restoration so it was possible to play the organ without electricity. Also rather interestingly the Copel 8′ from the Hauptwerk shares the same dimensions from c-c3 as the Copel 8′ in the Rückwerk of the famous Festorgel in Klosterneuburg (Niederösterreich). Back in war times in Austria, several churches had to not only give away their bells for gun production, but also the facade pipes of the pipe organs. This organ was spared and is one of the rare examples still with it’s original facade pipework (from 1700). Today the organ has 1238 pipes and was last restored in the year of 2009.

As the organ received a rather modern looking console, we decided to use a different console from the organ from Obermillstatt, modified to fit the Obervellach’s organ case painting. It was also built by Pirchner (1983) but in a more historic looking style which fits the instrument better. The rank Schwebeprinzipal 8′ got renamed to Salizet 8′ as it isn’t a beating rank anymore and suited the disposition better. The original manual compass (C-c3) and pedal compass (C-d1) were extended accordingly to f3 and f1 in the sample set.

Despite its turbulent story, the organ received back much of its original beauty and character. Several professionals were surprised to find such a nice instrument in a rural place like Obervellach. 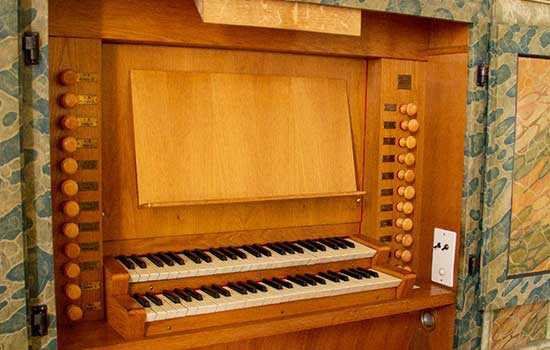 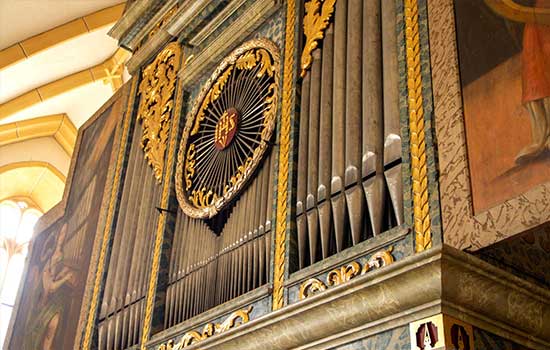 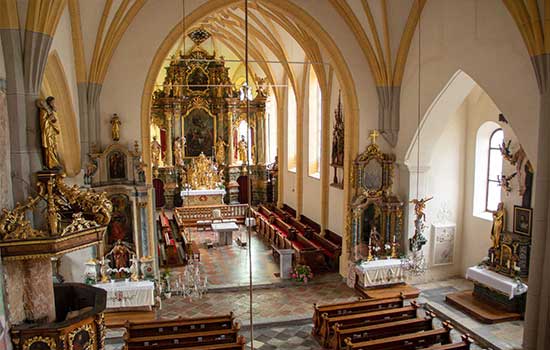 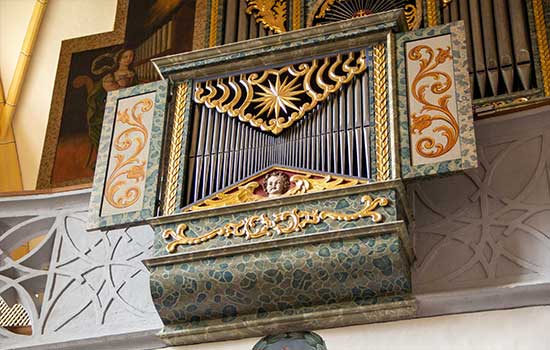 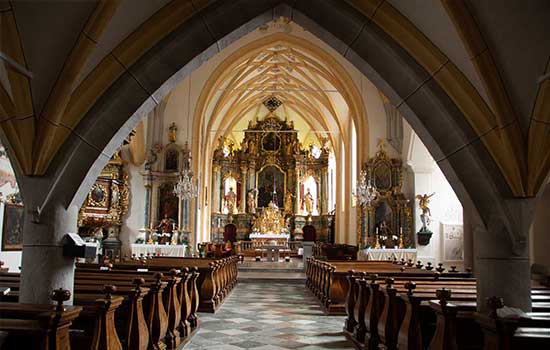